Ciaran Kilduff scored his first goal of 2018 last night as his side Jacksonville Armada defeated The Flagler Saints 2-0 in a pre season friendly in St.Augestine.

Kilduff, a half time substitute, netted Armada’s second on 53 minutes, when he got the hosts’ goalie off guard with a delicate chip to the back of the net. The Kilcock man was also involved in his sides first goal, when following some great link up play, he set up Irish-American Connor Doyle to net on 49 minutes.

The win was Jacksonville’s first in their three pre season games so far in 2018 as they ready themselves for the NPSL season. 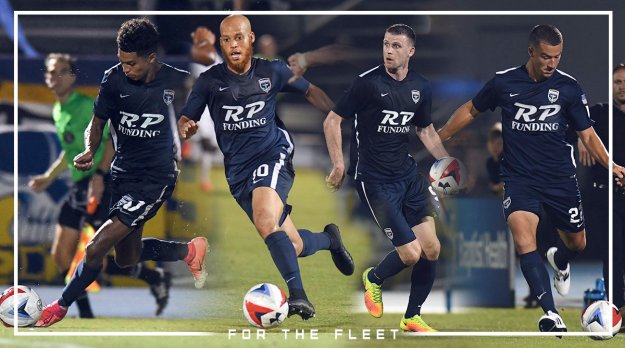 It was confirmed during the week that Kilcock man Ciaran Kilduff, along with three other players have returned to Jacksonville Armada for 2018.

Kilduff, who joined Armada in 2017 and went on to score four goals as the Florida club just missed out on a play-off place in the NASL, returned to America in late January with his and the club’s future still up in the air.

The club were unsure if they would have a league to partake in for 2018 but it was revealed two weeks ago by club owner Robert Palmer that the club would play in the National Premier Soccer League (NPSL) from April through to July, using it as a pre season warm up for August.

It’s not the first time the club have had to drop down to the NPSL. Palmer is currently working with other owners to get the NASL back up and running for the Fall League. The club also hope to play a number of high profile exhibition games over the coming months.

Former Dundalk star Kilduff is joined back at the club by Kalen Ryden, JC Banks and Derek Gebhard, while in the past few days the club have also signed two new players Conor Doyle and Javier Monsalvez.

We wish Ciaran all the best in 2018. We have been following his fortunes for a number of years now and a nicer man you will go a long way to meet.

Ciaran Kilduff has been named on the NASL team of the week for the second time since his move Stateside from Dundalk to Jacksonville Armada FC.

Kilduff was a shoe in for one of the positions upfront following his brace away to New York Cosmos last Sunday night. He has been named alongside another former League of Ireland player Eamon Zayed. The pair once played together at Shamrock Rovers.

The Armada’s new number 9, Kilduff, gave his side the lead in The Big Apple after just 13 minutes before doubling their lead just before half time. He was also joined on the team by his team mate Kalen Ryden at centre half.

The Cosmos did put some dampner on the night for the big Kilcock man, fighting back from 3-0 down to snach a draw (3-3) in added time.

Kilcock’s Ciarán Kilduff recently joined the Jacksonville Armada FC, but he has certainly endeared himself to the club’s faithful in short order. The Irish forward has scored three goals in his last two games, including a pair of tallies in a 3-3 draw with the New York Cosmos on Sunday night. Kilduff was named North American Soccer League (NASL) Player of the Week for his two-goal performance, the league announced Monday.Jacksonville jumped ahead of the Cosmos early in the club’s contest at MCU Park and it was Kilduff that led the charge. The native of Kilcock, Ireland, opened the scoring in the 13th minute. Jack Blake’s corner kick made its way through a crowd of bodies before Kalen Ryden headed the ball towards Kilduff. The Irishman’s effort came off the cross bar, but the ball bounced just over the line for the opening tally.The forward showed his work rate away from goal to earn his second goal of the contest. He dispossessed Cosmos midfielder Danny Szetela and drove towards the goal before sending his low effort through goalkeeper Kyle Zobeck’s legs in the 41st minute. The 28-year-old now has three goals in four appearances for the club.The action on the field, though, was certainly far from over in Brooklyn. Blake tacked on a third goal for the visitors in the 65th minute before a tremendous turnaround by the defending champions.Javi Márquez pulled a goal back for New York in the 79th minute after a lovely chipped pass from the reigning NASL Golden Ball winner Juan Arango. Just ten minutes later, Eugene Starikov headed home a cross from Ayoze, who then played provider again deep into stoppage time. Ayoze found Juan Guerra, who cut in from the left and fired a shot that left Jacksonville goalkeeper Caleb Patterson-Sewell rooted to the spot.While Jacksonville didn’t leave New York with all three points, Kilduff’s effort helped the club extend its road unbeaten streak to three games. Jacksonville currently sits in the final position for The Championship, the league’s four-team postseason tournament, which gets underway in November Ciaran Kilduff has been named on the NASL Team of the Week following his side Jacksonville Armada FC’s 2-0 victory away to New York Cosmos on Sunday night.

Kilduff, who scored his sides’ second goal, was named in a front three on the leagues team of the week alongside two of his team mates, Caleb Patterson-Sewell in goal and Kalen Ryden in defence.

Kilcock man Kilduff was lining out in only his third game for the Florida State club and repaid his new manager’s faith by scoring his first goal for Jacksonville before half time, cementing their lead.

Armada have now won two of the three games Kilduff has been involved in, beating Indy Eleven FC 3-2 last week.

This weekend’s return game with Indy has been re-scheduled due to the impending Hurricane IRMA. Stay safe Ciaran and all affected.

Ciaran Kilduff was introduced to the home crowd sooner than he thought as Jacksonville Armada brought him on 30 minutes into their 1-0 loss against Miami FC at The Hodges Stadium on Sunday night.

Kilduff replaced the injured Tony Taylor in what turned out to be tough debut against the NASL Spring Season Champions.

Despite his sides extensive efforts including thirteen shots with four on goal, the Armada FC lost out and remain bottom of the table.

Although they were unable to collect any points on Kilduff’s debut, head coach Mark Lowry remains positive.

In the middle of the first half, Ciarán Kilduff made his first appearance for the Armada FC– just two days after arriving in Jacksonville. Tony Taylor went to the ground with an injury and Kilduff replaced him in the 30th minute.

“Losing Tony really hurt us [because] he was looking good and sharp around the box. I’m pretty sure he would have scored tonight,” said Lowry. “Unfortunately we lost Tony earlier than we wanted to.”

Kilduff had a chance after his new team mate Rebellón dribbled the ball past multiple defenders before cutting the ball to the Kilcock man whose shot went just left of the goal.

Despite the best efforts of Kilduff and Armada FC, Jacksonville could not find the net to equalize the, meaning Miami FC took all three points at Hodges Stadium.

Next the Armada FC will hit the road, as they travel to face Indy Eleven. Kickoff is at 7:30 p.m. Saturday in Indianapolis. The team will return home on Saturday, Sept. 9 for First Responders Night at Hodges Stadium.

Dundalk FC striker Ciaran Kilduff has left the defending League of Ireland champions to move to American NASL side the Jacksonville Armada FC.

Kilduff, who scored 31 goals in 82 appearances for the lilywhites, including the match winner against Maccabi Tel-Aviv in the Europa League group stages, the first ever win for an Irish side in European competition, leaves Dundalk on good terms and reflects on his two years at club as the best of his career.

“It has been the best two years of my football career,” Kilduff told Dundalk’s official club website.

“There’s no other way to describe it. It has been the best dressing room, the best staff, best management team that I have been involved with. I have had some really great moments personally, individually and collectively as a team with the club.

“I have had some bad moments as well with some injuries too. It was eventful along the way.

“I am just really happy to have been a part of something which has been so great. There was so many great nights and moments for us. To be part of it is something that I will always be proud of.

“Dundalk has been an amazing story in Irish football in the last five-six years from where they came from to where they are now. I am just so happy and proud to have been part of it.”

Kilduff said that his move to the Armada was a ‘now or never’ opportunity for him and his family, and that he’ll be looking to try and emulate former Shamrock Rovers teammate Richie Ryan’s move from the Hoops to the NASL.

“For me, I will always look back at this as the greatest two years in Ireland,” added Kilduff.

“When my daughter gets a little older and gets to school going age things will have to change so I felt that this was a ‘now or never’ situation for me. Football in America is taking off. I am going over there to grasp it and try to further myself.

“I see players like Richie Ryan and players like that who have bettered themselves and furthered their careers.

“There is so much over there, so much room for progression over there. It’s not something I have taken lightly at all.

“It’s a lifestyle change and it is something that I have been open to for a while. It has just fallen for me at this time. It ticks a lot of boxes for me and I am excited to get going.”