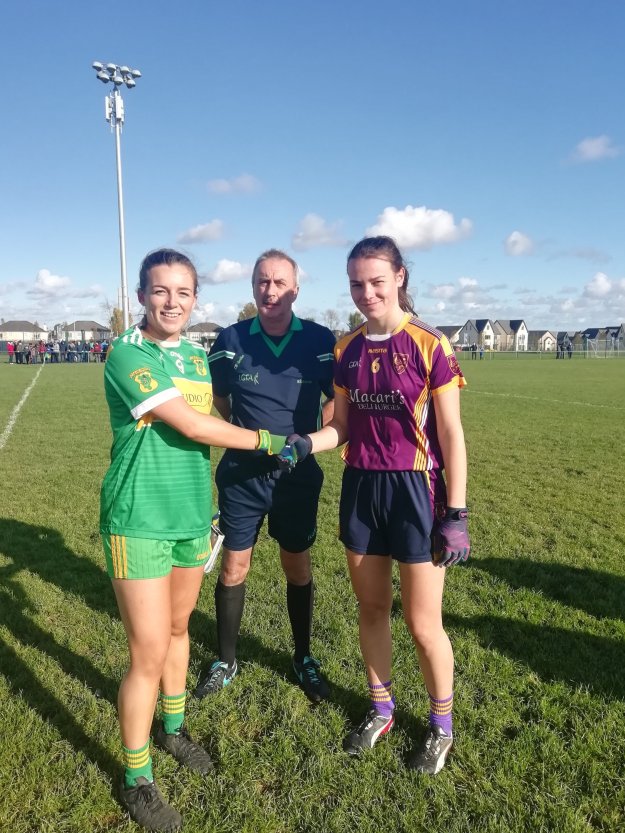 A tremendous second-half performance sealed Kilcock’s place in the Leinster Junior Final next week as the eventual winners came from five points down, twice, to seal a win in Kilcock Gaa last Saturday, October 26th.

Full forward Grace White put in a spectacular performance scoring 2-06, but it was Kilcock’s sheer determination and spirit to keep fighting that was most impressive in this excellent win.

A couple of the girls had to rearrange their holidays last minute to play the game and even this level of commitment alone showed that there is something special about this Kilcock team.

Grattans started the strongest of the two sides and were unlucky not to have had a goal inside the opening five minutes, with Kilcock goalie Eimear Kelly pulling off two top class saves.

The Longford Intermediate Champions did manage to get the first score of the game when their midfielder Caoimhe Lohan kicked a point. The continued to show some great movement in the first half and this was evident by their wing-back Sophie Hogan who burst up the pitch for a goal.

Midfielder and Grattans free-taker Úna Clarke put five points between the sides with only 10 mins gone before Grace White got Kilcock’s first score after 14 minutes from a free.

Grattans went straight up the pitch and chipped in with their third point of the game. Kilcock captain Caoimhe Fagan showed some of her leadership qualities when she kicked a point from thirty meters and Grace White added a second free to bring a goal between the teams.

Grattans added a further two points with frees from Úna Clarke before a super Caoimhe Fagan point had the sides going in at the break on a scoreline of Grattans 1-5 Kilcock 0-4.

Grattans were the deserved leaders at half-time and Kilcock were not performing up to their usual standards. It was going to have to take a massive performance in the second half against the breeze to overcome the Longford side.

It was Kilcock’s full-forward Grace White who got Kilcock’s first score of the second half when she pointed from play and soon after birthday girl Sarah Lavin gave herself the perfect birthday present when she goaled for Kilcock and the sides were level once more.

The goal gave great hope to the Kilcock supporters but this was short-lived when Grattans replied with a goal of their own right away. An Úna Clarke free and Laura Valentine point put five between the sides once again.

Kilcock were not going to give up however and they kept battling and were rewarded when midfielder Megan O’Connor made a great run up the pitch and passed the ball to Grace White who rifled the ball into the top corner of the net. White added another free immediately after to leave a point between the sides.

Grattans put the foot on the pedal once more and added three points without reply and it looked like Kilcock’s excellent year was coming to an end. Two Úna Clarke frees and a Clodagh Lohan point put four points between the sides.

It was hard to see Kilcock coming back from this deficit, but you can never say never with this Kilcock team as they have shown us on many occasions throughout the year.

The game was swinging into the final quarter when corner-forward Emma Robinson kicked her first score of the day with a well taken point, before Grace White added two frees to bring a point between the sides once again.

Kilcock took the lead for the first time in the game just inside the last 10 minutes, when, a great solo effort from Grace White meant that she found space for herself and her shot bounced across the goal-line, bringing the large home support into raptures.

Úna Clarke kicked over another free for Grattans to bring it back to the minimum once more and though the visitors had a couple of scoring chances towards the end, they were unable to take them.

It was Megan O’Connor and Emma Robinson who finished off the scoring for Kilcock, with both of them kicking over points just before the ref blew his fill time whistle.

It was an unbelievable win for this Kilcock side who showed tremendous fighting spirit and a never say die attitude. They have now sealed their place in Sunday’s Leinster Junior Championship Final where they will play Navan O’Mahony’s of Meath.