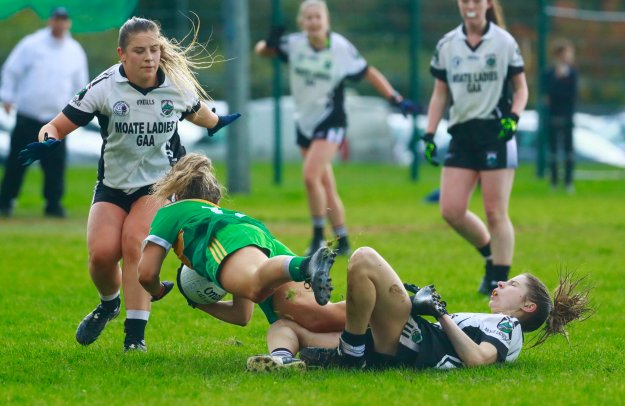 By Robert Cox
They say you should never look a gift horse in the mouth and Kilcock Ladies were in no mood to that when they took on Westmeath Junior Champions Moate in the Leinster JFC Quarter Final in Kilcock Gaa on Saturday, October 19th.

With both sides getting a second bite of the cherry in the Leinster Championship, having been reinstated due to Old Leighlin of Carlow being ineligible for the competition, this was always going to be a cagey tie, with neither wanting to experience the heartache of exiting the competition for a second time. And it was Kilcock who finally came through a tough game to win out by three points in the end.

Kilcock went ahead inside the first thirty seconds when centre forward Aisling O’Connor took control of the ball before cutting through the Moate defence and slotting the ball over the bar. If the hosts thought O’Connor’s score was going to set the tone and Moate were simply going to roll over, then they had to quickly think again as the Westmeath side gained control of the game to hit three points in a row through Chloe Moran and Casey Rotroe from play and Brenda O’Brien from a free to lead three points to one after eighteen minutes as the rain began to fall.

At this juncture the game began to open up, which seemed to suit Kilcock and when they pushed up on a defensive Moate side, they suddenly began to bear fruit.

The eventual winning of the game came between the 20th and 25th minute for Kilcock with their sharp-shooting full-forward Grace White pointing from a placed ball, having been clearly singled out for special attention from the Moate defence. From the resulting kick out O’Connor got her second point of the day before the games only goal from veteran Sheena Byrne changed the entire landscape of the tie.

Byrne got on the ball about just inside the penalty area and despite the best efforts of the Moate defence and goalkeeper to save the shot, the ball rolled into the net and Kilcock were a goal ahead. To the large home support in attendance, Byrne’s effort seemed to take an age to reach the goal, trickling along the muddy surface, with gasps aplenty as it looked likely at one point that the ball would in fact stop short of the line. One supporter likened it to a scene from the over 75s Football match on Father Ted, when the ball took an age to reach the goal, with the keeper struggling to get back, having gone the wrong way!!

Regardless of how the ball ended up in the net mattered little for Kilcock as they took a lead that they would never relenquish. Moate responded with a point almost immediately through the impressive Anna Sheerin. Kilcock still had time for another goal chance, which were a rare commodity on the day, but Grace White’s shot from twenty five yards hit the crossbar. In hindsight White will know she could have taken the ball on, with no one in a white Jersey between her and the goalie at the time.

Following that the teams went in at the break with Kilcock in the lead by two points on a scoreline of Kilcock 1-3 Moate 0-4.

Then came an almighty downpour. Just as the Laois referee was due to throw the ball in for the second half the heavens opened. Sensibly the players were ordered back into the dressing rooms to take cover. The supporters weren’t so lucky!!

When the rain abated and the rainbow appeared, the game resumed. And in a carbon copy of the first half, Kilcock won the throw in and went straight down the field to register the first score, except this time it was the hard working wing forward Sarah Lavin who raised the white flag.

It took Moate ten minutes to register their first score of the half and it came by way of a free from Anna Sheerin.

The next twenty minutes turned into a war of attrition, with only three more points registered. And even though the sun made an appearance, it couldn’t brighten up what was overall a dull game that lacked quality for long periods.

In saying that, it never lacked for excitement in terms of how close the score remained and when Grace White added another free to put three points between the sides once more, it looked like Kilcock might finally pull away.

Moate though were not about to go away and when Sheerin converted a free down the other end the margin was once again down to two with ten minutes remaining.

A two point lead can be very dangerous, especially in a tight game but the Kilcock defence, who were immense and in a very miserly mood throughout, stood firm and were in no mood to give up a goal chance that Moate so badly craved.

In fact it was Kilcock who would fashion another goal chance deep into injury time but forward Emma Robinson shot was excellently saved by the Moate goalkeeper Christine Warburton. Unfortunately for the latter she touched the ball on the ground outside the square and Kilcock were awarded a free. White made no mistake in converting her third free of the day, just before the referee blew his his whistle for full-time.

It was an excellent win for Kilcock (1-06 to 0-06) who fought hard in tough conditions, against a ressiliant Moate side. Though both team and management will know a big improvement in their overall performance will be needed if they are progress any further in the competition. They also know they have been given a second chance in been reinstated at Old Leighlin’ expense and will look to grab it with both hands.

Best for the winners were in main numbered from 1-7, especially Emma Maguire, Andrea McGrath and player of the game Laura Gibbons, who worked tirelessly to keep Moate at bay.

Kilcock now advance to the Leinster Semi-Final, where they will take on Longford Intermediate Football Champions Grattans in Kilcock on Saturday at 2pm.