By David Doyle of Rhyle Sports

Looking Out into that empty field evoked differing emotions in Keith Kelly. There was sadness that the same space that once was home to the tackles, the shrieks the boyhood heroes but above all the connectivity was now vacant. Struggling with his own mental health at the time there was also a yearning for the return of those carefree times, for the camaraderie and the simplicity.

Kelly went on to found Jumpers for Goalposts. It is a throwback concept to the days when outdoor activity ruled and its concepts are simple, accessible and inclusive. The ‘rules’ could not be simpler and in an era where almost everything is measured, ranked and tracked it is a refreshingly qualitative concept. The ‘rules’ alternate between simple and humorous. It is played on a grass area large enough to host a game. All that is required is a ball and four jumpers for goalposts. There are no officials, half time is when players need a break and when it’s time to finish up ‘next goal wins’.

The current media is awash with the epidemic that is mental health. Despite the fact that transportation and communication are easier than ever before as a race, we are more isolated and disconnected than at any time in history. With the situation worsening on a daily basis the ability to apportion blame is ongoing. Whilst Jumpers for goalposts is not a panacea for all male mental health ills it uses the dual strands of simplicity and retracing your steps to return you to a point in your life where you were at your happiest.

It is not a competitor to masters football and its origins and motivations in setting up tip the hat as far in the direction of mental health as they do to football ‘Jumpers for goalposts is very much about promoting a mental health space. As men, we just don’t talk and it is about giving men the opportunity and confidence to build up a network. Football acts as the hook’ adds Kelly.

Founded on a trial basis Kelly recalls an element of apprehension prior to the first meeting ‘It began as a sort of social experiment, I was tending to meet old friends mainly at funerals and I remember thinking would anyone actually turn up? Over 70 people showed up and had a great time’. From there the concept expanded to new locations and continues to gain a foothold in new communities. It has recently begun in Kilcock, Galway and Mountmellick.

As long as I can recall I have had a fascination with retracing your steps. In literal and simplistic terms retracing your steps is a regressive technique used to find something you lost. In metaphorical terms, it is about reconnecting with an inner sense of happiness and simplicity that has subsequently been either lost or eroded. Like many, when trying times or circumstances present themselves I tend to revisit places or activities that you associate with the creation of happiness. It has happened that often that it is uncanny.

In many ways, Jumpers for goalposts adopts that symmetrical approach by bringing you back to a situation that brought you happiness in your childhood and early adulthood. Whilst initially the love of the game may have brought you here it is now that plus the camaraderie and connectivity that has brought you back. Kelly sums up the concept ‘It gives you a really great sense of belonging, sometimes I think there is just not enough laughter in the world. Jumpers for goalposts is completely non competitive. If you fall over, someone picks you up”. 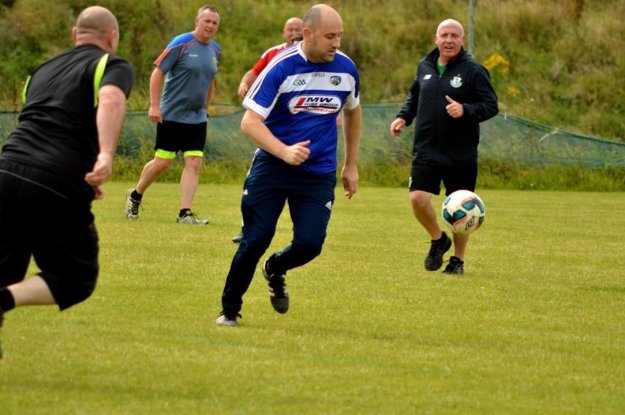 The success of the concept and the uptake thus far is something Kelly is very proud of as it creates a sense of laughter and community spirit. The concept has now spread to four locations throughout the region and new community leaders have come on board. Participants have included Paul Howard (of Ross O’Carroll Kelly fame) and Kelly has been interviewed on the Ryan Tubridy show as well as being featured in the Irish Independent by acclaimed journalist Ewan McKenna. Yet, despite the lights, camera, action moments that have arisen since the creation of the concept I am left in little doubt that the intrinsic satisfaction garnered from the simple differences jumpers for goalposts makes in the lives of the participants outweighs that of any national profile or attention ‘I tend to arrive a little bit early and reflect, I remember sitting on the side of the hill one day and a guy arrived early. In our conversation he opened up to me describing some of the issues he was having with alcohol and cocaine. I remember thinking that jumpers for goalposts was almost part of his therapy and ultimately that is what the concept is all about’.

The next time you pass by a grassy area on Sunday morning you may be greeted by an unfamiliar sight. A plethora of middle aged men may now occupy the previously vacant space. Whilst you will bear witness to the banter, the laughter, the tackles, the therapy and the connectivity there will come a point where the tension may tangibly increase, just as the game draws to a close.