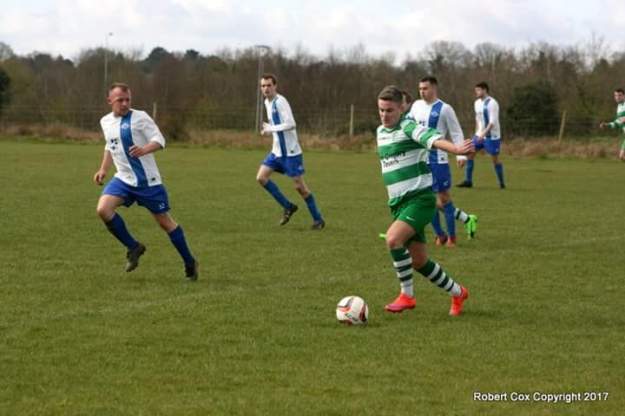 Kilcock Celtic came from two goals down to beat Inny FC 5-3 at The Bawnogues on Thursday night, August 10th, thanks once again in no small part to the goal scoring exploits of the mecurial Shane Fitzgerald.

Fitzgerald who has now scored more hat tricks this season than most have had hot dinners, was described best on Facebook by one of his friends after the game as “he scores when he wants”.

Aside from the strikers display though, the whole team put in possibly their best performance of the season to date, securing their 3rd win on the trot in the league in the process. In fact Al Myles’ men are in such a rich vein of form at the moment that they have scored 18 goals in that time.

Inny for their part came into the game unbeaten in 11 games, so Myles and his men were under no illusions of the task at hand, especially since the visitors had won the reverse victory earlier in the season.

Kilcock got off to the worst possible start going 2-0 down inside the first ten minutes but credit to the lads they never dropped their heads and took control of the game for the remainder of the half, to turn the tie on its head going in at the break 3-2 up. Midfielder Remi Kareem (2) and Fitzgerald with the goals.

Myles said of Kareem after the game; “Remi is playing in his first season at senior level and he has amazingly bagged 13 goals to date, no doubt he will add a few more before the season’s end”. Myles added; “We knew that the game wasn’t over at half-time and that Inny would not lie down after the break”.

Myles was bang on the money because no sooner had the 2nd half started that the away team scored again to make it 3-3.

With the game in the melting pot, the Kilcock rear guard held firm to keep a determined Inny side at bay.

Fitzgerald’s 2nd goal (Kilcock’s 4th) will be one for the dubious goal committee, with many in attendance claiming it to be an own goal. But you try and take it off Fitzgerald!!!

There was no denying his 3rd though as he rounded the goalkeeper before calmly slotting the ball into an empty net to insure Kilcock secure a vital victory.

Myles (who was in jubilant mood towards the games end, joining the players on the pitch to celebrate the win) summed up the game; “Everyone put in a great shift, Remi & Shane with their goals will obviously take most of the plaudits but the lads in defence & midfield put in a serious shit throughout. Second half sub Alan Byrne done his part when he came on and Aaron once again made some fine saves over the course of the match but a special mention to Dylan Bradley in defence & Ryan O’Connell in midfield who both stood out individually on the night”.