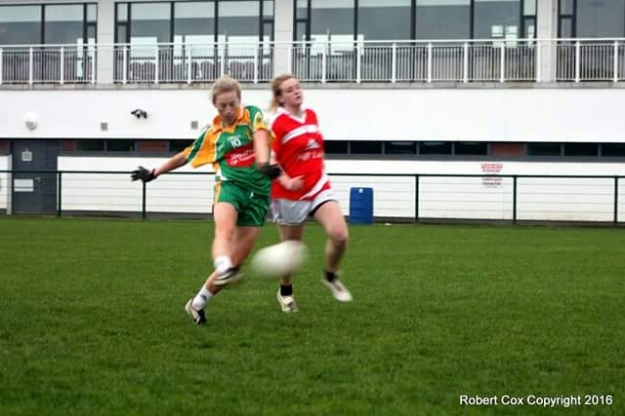 Trailing by eight points heading into the final ten minutes of the game Powderly and her team mates showed a great fighting spirit to battle back and were duly rewarded when the impressive Aisling O’Connor found the net with the final piece of action of a pulsating game, curling her effort in off the post after forging her way through a whole host of blue and yellow jerseys.

Kilcock came flying out of the blocks in the 2nd period with Powderly firing a left footed shot to the back of the net straight from the throw in.

The two sides traded scores in a tense battle with Lorna Murray, Sheena Byrne, Aisling O’Connor and Caoimhe Fagan pointing into the wind.

At the other end Catherine O’Malley and Wiggy kept Carbury’s noses just infront and the duo looked to have put the game beyond doubt when they combined for O’Malley to blast the ball to the back of Eimear Kelly’s net, despite the latters best efforts to keep it out. At this stage there were eight points in it and Carbury looked to have secured the points but rule out this Kilcock side at your peril!!

Pushed on from the back by player of the game Emma Maguire, Kilcock rallied and late goals from Powderly (2) along with O’Connor’s winner helped them snatch a draw from the jaws of defeat.

Eimear Kelly was solid in goals, pulling off some crucial saves and finding her team mates with a high percentage of her kickouts. Emma Maguire lead by example at centre back while Caoimhe Fagan used her engine to cover serious ground throughout in midfield. Upfront Aisling O’Connor and the hat-trick hero Powderly got the required scores needed to salvage an important draw. A special mention to debutants Brianne Traynor, (who started wing back and put in a fine display) Charley Burke, (who also started) Aoife McArdle and Sarah Lavin from the bench.

Kilcock play Clane on Tuesday next in Kilcock.