Blackhall Gaels Donnacha Tobin returned to action following an arm injury to help the Meath senior footballers to a crucial victory over Galway in Division 2 of the NFL at Pairc Tailtean today, March 5th. 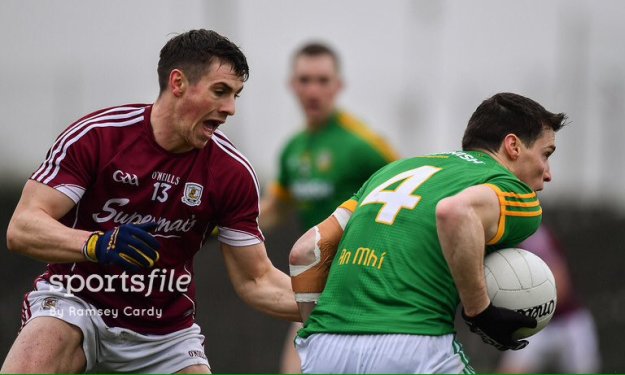 Tobin lined out at corner back in the 1-13 to 0-15 win and along with the returning Pauric Harnan added a solidity and experience in defence that had been missing in recent weeks, especially in defeats to Down and Kildare.

The versatile defender had hinted at a return in the past few weeks but was instead allowed to line out for his club Blackhall in two league games to aid in his recovery and boost his match fitness.

At the other end of the field it was the Donal Lenihan show as the Dunboyne man hit 1-5 in a man of the match performance as the men in green and gold held on in a gripping finish to claim the all important two points.

Tobin was black carded late on after becoming involved in a heated exchange with Galway oppoonent.

Meath manager Andy McEntee showed both relief and joy at the final whistle as portrayed in this Sportsfile photo below.

Meath supporters left Pairc Tailtean in buoyant mood, happy to secure a League victory but even more pleased in the manner of the performance and the returning fight in the jersey.

Meath senior football panel prior to their NFL clash with Galway.

Credit Ramsey Cardy of Sportsfile and Meath Gaa Facebook for the photos.