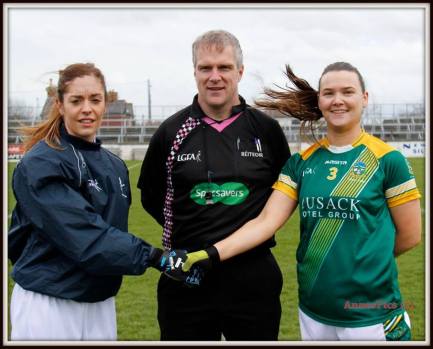 Paula shaking hands with Kildare Captain Aisling Holton before the two sides met in the League this year in Newbridge.

Debut for County: 2003 originally. Then after a long break, August last year.

Position: Midfield for club and in the backs for County.

Greatest Achievement: Becoming a Chartered Accountant & being asked to Captain the Meath ladies this year.

Sporting Idol: Jane Burke for football and Jane Dolan for Camogie. I’m lucky to have played alongside such skilful hardworking players.

GAA Player with biggest influence on you: Jane Burke and people at county have recently started telling me how much I remind them of her. Huge compliment.

Best player played with: Other than my Meath teammates. I played college football in UL back in 2004/5 and would have played with Bríd Stack and Sorcha Furlong and a few other accomplished footballers. I didn’t stay in UL but the year I played I won an All Ireland Fresher’s medal for the seven aside tournament.

If you could sign two players for Meath/Blackhall who would you sign and why? Blackhall – Mmmmm…. I think you might know the answer already from my previous replies- I’d get Jane to transfer back from Clashmore-Kinsale (Sorry Jane, totally fan-girling over you here) Meath- Niamh Crowe.

What does playing for Meath/Blackhall mean to you? Playing for Blackhall means so much more than the football or camogie. I’ve been a part of the club now for 16 years and made lifelong friends. Some are friends who would have mentored me when I was only a teen and no longer play themselves. Now I’m one of the more mature players and have new friendships with the younger girls and not to mention friendships with our diehard supporters who are parents, siblings, ex-managers etc. Over the years there have been some tough times for people in the club and it’s something else when you see all of these people pulling together to help in any way that they can. I also have 16 years and counting worth of great memories!

Playing for Meath is an absolute honour. It gives me the chance to try and push myself to be the best footballer that I can be. We are trying to rebuild the team at the moment. In recent years some of the Meath ladies most influential players have moved on after giving 10 plus years of dedication to the county. So naturally enough, things haven’t always been smooth. Our managers have just been ratified for 3 years and we have a great committee and PRO, so together we are hoping to be the squad of players that helps to put pride back in our Jersey and bring Meath back to winning ways.

Favourite Song: Anything sang at camogie training by the fabulous dueting brother and sister act Siobhan and Blackie Whitty. Be that Rhianna’s Work or Michael Jackson’s Pretty Little Young Thing. Or Ann Murphy From The Window To The Wall/Get Low. I’d need to hear them all again to decide…..

Toughest Opponent: I try not to let a player’s reputation intimidate me. I do hate marking Annmarie Fagan but she’s in Oz now so I’m out if the woods there!

Biggest Joker: Toss up between Emily Mangan and Ann Murphy.

Hardiest Teammate: Niamh Lister/Vicki Wall. They recently marked each other and the bruises on their legs were unreal!

Fastest and Slowest Teammate. Fastest Niamhy G, I do be too busy trying to catch her to look behind me and see who’s last!

Most Skilful Teammate: Stacey Grimes and her soccer moves.

Hardest and worst trainers: I still have nightmares about Paul Regan’s burpees.

Best and worst dancer: The whole camogie team doing rock the boat to the likes of Martin Garrix ‘Animals’. I’m undecided if it’s a genius dance move or just a mess.

Teammate who spends longest in the shower: The Byrnes

Any pre-match rituals: I have a habit the minute I put on my boots in the dressing room of standing up and bouncing from foot to foot, this continues until throw in!

Advice for younger players: Be careful not to burn out. At minor/u16 I see a lot of girls playing more than one sport and playing schools/adult level also. Don’t be afraid to say, “my legs are just bloody shot, I need a break tonight”!!!!

If you were stranded on a desert island and were only allowed bring three things with you, what Three things would bring: Tom Hardy, Wilson, a kindle full of books I suppose. Hard question! 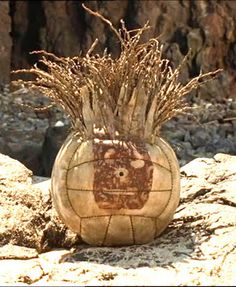 Mr. Wilson, Tom Hanks friend in the film Castaway. No surprise that Paula has decided she would take something similar with her to a desert island!!

Ambition for remainder of 2016: As an individual player- to improve my own Camogie skills. It’s such a hard & skilful sport. I also want to improve my speed. With Meath as a team, I think that we have set ourselves some benchmarks against certain teams in the league. I hope that we can improve on those and our rematches in the championship will show us if we have. 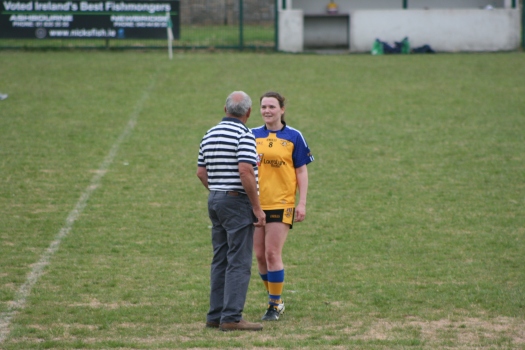 Paula getting some post game advice from her father Paudric after her club Blackhall Gaels beat Donaghmore/Ashbourne in the Meath IFC in 2015.