MONDAY, 27 FEBRUARY 2012
I have a Black Dog: Do any of you ever been wonder why I use ‘My Black Dog in my title for my blog? Well if so, there are a few reasons. And I know I explained this in earlier blogs but just in case you have not been following me from the start, here they are. Firstly and most obviously, I own a black dog. Kiwi, the poodle. The most loyal dog in the world and someone who stays by my side regardless of my mood. Secondly the term black dog was made famous by Winston Churchill who suffered from depression and called it his black dog as if it followed him everywhere he went. And lastly because Linda recently got me a great book called ‘I had a black dog’. It is a short story portrayed through both words and pictures and is about the personal experiences of a man who had depression, called Matthew Johnstone. He externalizes his depression by calling it ‘Black Dog’. It is full of heart warming and insightful pictures revealing Matthew’s journey. His touching observations alighted my own compassionate feelings for the state of depression and in small ways it has helped me it has helped me find new hope and to work through it. I found out that the ability to see my ‘Black Dog’ as something that is happening to me rather than the ‘real me’ could help me think about my depression in a constructive manner. The book is well worth getting if anyone wants to learn a bit more about depression in a witty way instead of reading for hours, the endless scientific explanations for it. If you cannot get hold of the book do not fret as I am going to use a bit of it in my blog and change the words a little so it is me in the book!! The name of the original book is ‘I Had A Black Dog’ but as I still have depression the first thing I have to change is the title… ‘I Have A Black Dog’

Robert’s Story: Day 1
I have two Black Dogs. The good one named Kiwi and the bad one named Depression. Now while Kiwi is thankfully always in my life, my Black Dog Depression has been in and out of my life for the past three years. Mostly he is in it. Whenever he makes an appearance, I feel empty and life just seems to slow down. 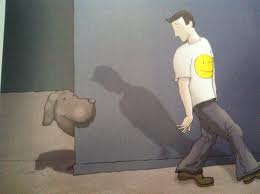 Black Dog can surprise me with a visit for no apparent reason or occasion.